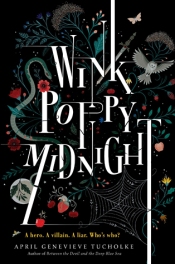 Wink is the odd, mysterious neighbor girl, wild red hair and freckles. Poppy is the blond bully and the beautiful, manipulative high school queen bee. Midnight is the sweet, uncertain boy caught between them. Wink. Poppy. Midnight. Two girls. One boy. Three voices that burst onto the page in short, sharp, bewitching chapters, and spiral swiftly and inexorably toward something terrible or tricky or tremendous.

What really happened?
Someone knows.
Someone is lying.

“Once upon a time I thought I could change stories, make them go the way I wanted, instead of where they actually went.”

When I met April Genevieve Tucholke the other day, I told her that I was wary of her characters and she told me that I could trust Midnight. I said I would take her word for it.

I absolutely devoured this book. I can’t remember the last time I read a book so quickly. This is a testament to Tucholke’s fleeting and whimsical writing. It was so easy and exciting to read, almost like picking up your first fantasy book as a child.

I went into this book very skeptically. I expected to be tricked and lied to and potentially disappointed but that was hardly the case. I mean, yes, readers should still be skeptical, but it was far from being a disappointment.

I had a sense of things about halfway through, but it did not deter me from wanting to finish the book.

On another note, I’ve noticed other reviewers drawing a few comparisons between this book and We Were Liars (you can read my review of that book here). We Were Liars was very disappointing, and I had no clue what the premise of that book was before I started reading it. Heaven knows how annoyed I would have been if I went into that story as skeptically as I did this one. Basically, Wink Poppy Midnight was executed perfectly in the ways that We Were Liars wasn’t.