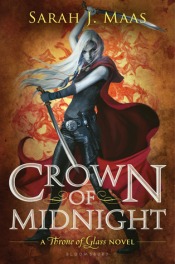 From the throne of glass rules a king with a fist of iron and a soul as black as pitch. Assassin Celaena Sardothien won a brutal contest to become his Champion. Yet Celaena is far from loyal to the crown. She hides her secret vigilantly; she knows that the man she serves is bent on evil.

Keeping up the deadly charade becomes increasingly difficult when Celaena realizes she is not the only one seeking justice. As she tries to untangle the mysteries buried deep within the glass castle, her closest relationships suffer. It seems no one is above questioning her allegiances—not the Crown Prince Dorian; not Chaol, the Captain of the Guard; not even her best friend, Nehemia, a foreign princess with a rebel heart.

Then one terrible night, the secrets they have all been keeping lead to an unspeakable tragedy. As Celaena’s world shatters, she will be forced to give up the very thing most precious to her and decide once and for all where her true loyalties lie… and whom she is ultimately willing to fight for.

“But he had no idea what sort of darkness lurked inside her, or what sort of monster she was willing to become in order to make things right.”

This was good. Quite good. I feel like abandoning all of my predetermined reading choices so I can pick up Heir of Fire instead.

Celaena’s arrogance is no longer as off-putting as it was in Throne of Glass, and we finally get a real glimpse of the general badass-ery that everyone boasts about. This was a good example of “show, don’t tell”. I feel like the issues I had with Throne of Glass were corrected or masked in this sequel. It was more exciting, less predictable, and kept me wanting to read one more chapter, after chapter, after chapter, until I finished the whole damn thing. We also learn more about the history of some characters, which is nice. Everyone loves a backstory.

Also (surprisingly), I was worried that the book would be 99% romance and 1% fantasy, but the balance was perfect. The relationships were complementary to the plot and not the other way around.