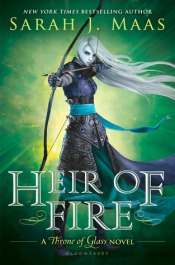 Celaena Sardothien has survived deadly contests and shattering heartbreak—but at an unspeakable cost. Now she must travel to a new land to confront her darkest truth…a truth about her heritage that could change her life—and her future—forever.

Meanwhile, brutal and monstrous forces are gathering on the horizon, intent on enslaving her world. To defeat them, Celaena must find the strength to not only fight her inner demons but to battle the evil that is about to be unleashed.

“You collect scars because you want proof that you are paying for whatever sins you’ve committed.”

This book was filled with a lot more despair and angst than I anticipated. Where there was once motivation and tyrannical arrogance in our Fireheart, there is now constant self-doubt and misery. Hopelessness. It was quite a drastic change from the Celaena we first met.

Just as Celaena’s will to fight—and her will to live—was dissipating amongst the ashes of her heartbreak, the usual excitement of the plot was also withering away. Burnt out. No sparks. Please forgive me for my puns. It’s hard not to think of flames after reading this book, haha.

There are a couple of things that I did not like. First, time seemed to go slower during this book. In fact, most of it dragged (particularly the beginning). It also felt like Celaena was in Wendlyn for several months, while Chaol and the others were in Adarlan for only a few days. The timeline was just weird to me. Second, the constant change of narrator was annoying. I mean, I get why it was done. Seeing as the main characters have been separated across faraway lands, the P.O.V. changes allow the reader to see what is conspiring against each of them in their respective lands. It just bothered me because Celaena’s P.O.V. was the only one that never bored me. Sometimes it felt like I was reading a diary entry, but just when things were about to get interesting, it would switch into the beginning of someone else’s boring entry. Does that make sense? I hope so. Either way, I appreciated the effort that was made to develop other characters, particularly the new additions. Shoutout to Aedion and Rowan and Manon! I’m really looking forward to seeing how their characters come into play once things get badass again.

On another note: You know the plot is lacking when the only thing that’s keeping you reading is the possibility of a “romantic” scene happening. Seriously. There was not enough action, be it the killing kind, or the sexy kind. (I actually cringed at myself while I wrote that, but it’s true.)

All in all, this was a little disappointing but I still can’t wait to read the next book… so clearly some things were done right.

★★★ (3.5 stars) because the next book has potential to rattle the stars.

One thought on “Book Review: Heir of Fire by Sarah J. Maas”