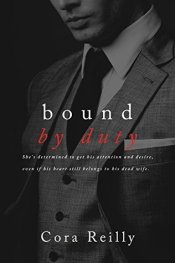 Dante – The Boss – Cavallaro’s wife died four years ago. On the verge of becoming the youngest head in the history of the Chicago mafia, Dante needs a new wife and Valentina was chosen for the role.

Valentina lost her husband, too, but her first marriage had always been for show. When she was eighteen, she agreed to marry Antonio in order to hide the truth: that he was gay and in love with an outsider. Even after his death, she kept his secret, not only to preserve the honor of a dead man, but also to protect herself. But now that she’s about to marry Dante, her castle of lies threatens to crash. Dante is only thirty-six but already feared and respected in the Familia, and he’s notorious for always getting what he wants. Valentina is terrified of the wedding night that might reveal her secret, but her worries prove unfounded when Dante shows her the cold shoulder. Soon her fear is replaced by confusion and indignation. Valentina is tired of being ignored. She’s determined to get Dante’s attention and desire, even if she can’t get his heart that still belongs to his dead wife.

“So I’m not just going to manage a casino, I’ll also be a bordello queen.”

This was a nice continuation of Bound by Honor, kind of. I assumed the sequel(s) would focus on the Scuderi sisters so it was a little surprising to have the focus of this book shifted onto Valentina. In retrospect, this makes a lot of sense. We now have a little glimpse from The Outfit’s side of things. This is beneficial to readers of the series so we’re not just seeing things from the Cosa Nostra’s perspective.

I’ve said it before and I’ll say it again, I love any book or film that discusses the inner-workings of the Mafia. Bound by Duty is a great example of the business, or duty side of things, but don’t be fooled–this series is far more Romance/Erotica than the synopsis lets on. Yes, there is certainly action, but most of it takes place in the bedroom. With that being said, there’s still quite a bit of bloodshed to look forward to. And there are always rats to be dealt with.

★★★★ (3.75 stars) for a great concept. I’d love to see this type of scenario portrayed in a movie or television show. And I miss The Sopranos.

One thought on “Book Review: Bound by Duty (Born in Blood Mafia Chronicles, #2) by Cora Reilly”