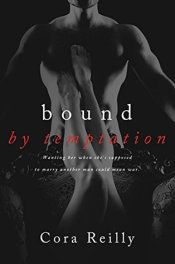 Liliana Scuderi has been in love with Romero from the moment she first saw him. After her sisters were married off for tactical reasons, she hopes she might be allowed to choose a husband for herself, but when her father promises her to a man more than twice her age that hope is crushed. No begging can make him change his mind.

Romero has always ignored Lily’s flirting. Her age and status made her off-limits but even someone as dutiful as him has only so much control. Wanting her when she’s supposed to marry another man could mean war between New York and the Chicago Outfit, and Romero has always put the Cosa Nostra first.

Lily suspects her sisters and Romero would risk everything for her, but is her happiness worth that much? Is love worth a war between the Cosa Nostra and the Outfit?

“She wasn’t the little girl I’d first met. She was a woman in marriageable age now.”

The review for this sequel is going to be a lot shorter than the others simply because not much happens. There’s a forbidden romance. Sneaking happens. Sex happens. And then war happens. Or at least, it lurks in the near future. This isn’t to say that it was boring to read (because it certainly wasn’t), it was just fairly standard in regards to plot development. It was all about the love and lust and hidden kisses, and there isn’t necessarily anything wrong with that. This book would definitely fall under the category of “Guilty Pleasures”.

I don’t want to spoil the plot for anyone but there is quite a cliffhanger at the end. Tensions are running high between The Outfit and the Cosa Nostra. And since we are all out of Scuderi sisters, I’m wondering if Fabiano is going to get to tell his story in Bound by Vengeance. I have no idea what to expect but I can’t wait!

One thought on “Book Review: Bound by Temptation (Born in Blood Mafia Chronicles, #4) by Cora Reilly”