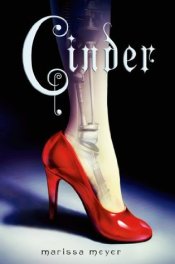 Humans and androids crowd the raucous streets of New Beijing. A deadly plague ravages the population. From space, a ruthless lunar people watch, waiting to make their move. No one knows that Earth’s fate hinges on one girl.

Cinder, a gifted mechanic, is a cyborg. She’s a second-class citizen with a mysterious past, reviled by her stepmother and blamed for her stepsister’s illness. But when her life becomes intertwined with the handsome Prince Kai’s, she suddenly finds herself at the center of an intergalactic struggle, and a forbidden attraction. Caught between duty and freedom, loyalty and betrayal, she must uncover secrets about her past in order to protect her world’s future.

“I’m sure I’ll feel much more grateful when I find a guy who thinks complex wiring in a girl is a turn-on.”

It took me quite a while to get into the story, but I found myself taking to Cinder and Kai quite easily. They are both very likable characters, so naturally it did not take long for me to start rooting for them. Just keep in mind that the plot moves fairly slowly.

On another note, I really like the concept of this disease that’s plaguing the Earthens. It sounds very interesting and adds more depth to the conflict between Luna and the Eastern Commonwealth. I’m curious to see if a cure will ever be found!

Plot-wise, things are a little predictable. There is a “discovery” later on that is easily predicted from the get-go, but that didn’t ruin the plot for me. I mostly just wanted to see what would happen after that particular information was confirmed. I won’t say much else though.

The book could have been better but I am still looking forward to the next instalment. I want to know how Scarlet, Cress, and Winter come into this!

One thought on “Book Review: Cinder by Marissa Meyer”