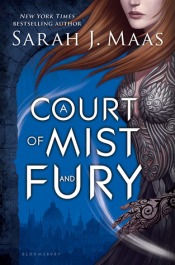 Feyre survived Amarantha’s clutches to return to the Spring Court—but at a steep cost. Though she now has the powers of the High Fae, her heart remains human, and it can’t forget the terrible deeds she performed to save Tamlin’s people.

Nor has Feyre forgotten her bargain with Rhysand, High Lord of the feared Night Court. As Feyre navigates its dark web of politics, passion, and dazzling power, a greater evil looms—and she might be key to stopping it. But only if she can harness her harrowing gifts, heal her fractured soul, and decide how she wishes to shape her future—and the future of a world cleaved in two.

“He thinks he’ll be remembered as the villain in the story. But I forgot to tell him that the villain is usually the person who locks up the maiden and throws away the key. He was the one who let me out.”

This book just made me melt into a puddle. It is so good. So, so good. I think I need to start keeping notes while I’m reading so I can avoid situations like this! My mind (and feels) are all over the place.

There is so much I want to talk about. For one, you probably shouldn’t be reading any ACOMAF reviews until you’ve read A Court of Thorns and Roses, but even then you run the risk of spoiling yourself. So I’ll try to be brief. Let’s just say that at the end of ACOTAR (during a certain balcony scene), I was under the impression that something happened, and my suspicions were confirmed in this book. Yes. However, I think it’s safe to say that Rhysand returns (and don’t we all love him for it) because none of the bloggers can conceal their excitement over him! And me neither, frankly. Rhysand, Rhysand, Rhysand.

In the beginning, we find Feyre quite traumatized after surviving Under the Mountain. She’s inherited an unknown amount of power, and yet, she’s weaker than ever. The character development was spot-on. We are introduced to a whole new crew, a whole new court, and a whole new Rhysand. Not to mention… a whole new Tamlin? Ew. That’s all I’m going to say about that.

We meet Mor, Amren, Cassian, and Azriel, also known as the Best Squad Ever. I sincerely apologize for sounding like the biggest fangirl alive, but it’s true. We also meet the hidden city of Velaris, which is literally what dreams are made of. I wish Velaris was real.

The worldbuilding was astounding. The descriptions for the Night Court are unreal. I felt like I was living inside of Rhysand’s townhouse. I am so, so impressed with Maas. I’ve enjoyed all of her books but her writing has seriously reached another level. I am incredibly proud of her. This book is massive, and yet, every page is so necessary.

I feel like it is also important to mention how steamy some parts in this book are. I see that it’s still categorized as Young Adult/Fantasy but it’s definitely walked over to New Adult territory.

In any case, there are old evils returning and it’s time to pick a side. You need to read this book. It will make you smile and scream and blush and laugh and cry.

★★★★★ (5 stars) because this is definitely going to be one of my all-time favourites. I bought a bicycle and name it Rhysand. The obsession is real.