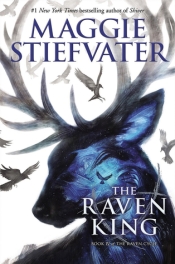 Nothing living is safe. Nothing dead is to be trusted.

Now the endgame has begun. Dreams and nightmares are converging. Love and loss are inseparable. And the quest refuses to be pinned to a path.

“He was a book, and he was holding his final pages, and he wanted to get to the end to find out how it went, and he didn’t want it to be over.”

I don’t know how to feel about things now that this is over. Or, sort of over. I’ll come back to this point later.

After reading other reviews, it’s easy to see that The Raven Cycle—but more accurately, the Raven lifestyle—is an acquired taste (although the majority of us are like Hungry Hungry Hippos when it comes to the ladies of 300 Fox Way and the boys of Aglionby). I wanted more, and I was prepared to take whatever I could get. I am so thankful for this book.

On that note, this final instalment was not perfect. It was everything I loved about every page of every other book in the cycle, and it was also not. It was Nino’s and Robobees, scrying and dying, dreamworlds and the real world, nobility and decomposition. It was always about the boys, and Blue, and Cabeswater. And in the end, it was still the boys, and Blue, and Cabeswater. I am so thankful for this world.

For me, The Raven Boys was love at first page. I don’t know how to put it into words. The writing style and character development and eerie thrill and magic that fills its pages is something you have to witness for yourself, from the very beginning. If you did not enjoy the first book, one can assume you would not enjoy the rest, but that’s irrelevant if you’ve already come this far on the journey to find Glendower. I am so thankful for this journey.

I need a separate paragraph just to note my appreciation of the creature/dreamer/warrior that is Ronan Lynch. “Half a dreamer, half a dream, maker of ravens and hoofed girls and entire lands.” He is something else. He is everything you could want from a character. Someone filled with so much good, bad, the ugly and beautiful, that their existence, to simply know them or know of them, is like a gift. I am so thankful for Ronan Lynch.

Also, Henry Cheng grinds my gears. Whatever type of plot device he was intended to be, his insertion into this world, into Gansey’s life, felt forced upon me. And I did not like it. In my opinion, the only good thing that Cheng added to the story was his sage advice to Gansey: “If you can’t be unafraid, be afraid and happy.” I am so thankful for these words.

And thank you, Maggie Stiefvater. Reading this series has made me feel like there truly is something more out there. I couldn’t imagine giving this anything less than 5 stars because I truly feel like this series will always be a part of me. Not in the same way that Harry Potter was (and still is), but just as significant. Just as important. I am so thankful for this series.

★★★★ (4.5 stars) because one can never be satisfied with something so beautiful coming to an end. But at least there’s still the possibility of something more. It’s never over. Cabeswater will always exist in some shape, way, or form.

There is danger in dreaming. But there is even more danger in waking up.

The trick with found things though, is how easily they can be lost.

Friends can betray. Mothers can disappear. Visions can mislead. Certainties can unravel.

“There was something unfamiliar about him. Something ferocious about his eyes, some sort of bite in his faint smile. Something altogether hectic and unsettled. She stood on the ledge of his smile and looked over the edge.”

The quote above accurately describes how I feel when I’m reading any of Maggie’s books.

From the first page of The Raven Boys, the character development, mystery, and possibility of something more, will hold you in a trance. Captivated. I thought this feeling would gradually fade away after the first book, but like Blue’s ability to amplify energy, everything is intensified with each subsequent book. It just keeps getting better.

And this. Ronan and Adam. Lynch and Parrish. Parrish and Lynch. PYNCH.

“I know when I’m awake and when I’m asleep,” Ronan Lynch said.
Adam Parrish, curled over himself in a pair of battered, greasy coveralls, asked, “Do you?”
“Maybe I dreamt you,” he said.
“Thanks for the straight teeth, then,” Adam replied.

Needless to say, I am highly anticipating The Raven King. How do you end something like this?

★★★★★ (5 stars) for obscenely tall men and fake lakes and crumbling caves. For Blue, Gansey, Noah, Ronan, Adam, Maura, Calla, Persephone (especially Persephone), and the hitman. And maybe even Orla, too. But not Greenmantle. Or Piper.

If you could steal things from dreams, what would you take?

Ronan is one of the raven boys—a group of friends, practically brothers, searching for a dead king named Glendower, who they think is hidden somewhere in the hills by their elite private school, Aglionby Academy. The path to Glendower has long lived as an undercurrent beneath town. But now, like Ronan’s secrets, it is beginning to rise to the surface—changing everything in its wake.

“In that moment, Blue was a little in love with all of them. Their magic. Their quest. Their awfulness and strangeness. Her raven boys.”

Gansey is royalty and hideously-hued polo shirts.
Ronan is fire and dreams and drag races.
Adam is magic and inner turmoil.
Noah is life and death.
Blue is spirit.

But Gansey is also the glue that binds the Raven Boys together.

★★★★★ (5 stars) because I’ve always wanted to be a part of something bigger than myself, and that’s what reading The Raven Cycle feels like. Like there’s something more.